As we reflect back on 2019, and get ready for what should be a frenetic 2020 for the Right to Repair, we wanted to share some of our highlights and milestones.

The goal of our Right to Repair campaign is both narrow and broad. Narrowly, we aim to pass legislation which requires companies to provide access to parts and service information so we can all fix our products. More broadly, we aim to fix a throwaway system which promotes waste and monopolized repair.

Running a campaign opposed by companies worth $2.5 trillion makes any progress hard won. But when I think back on what we’ve been able to accomplish, together, it gives me confidence that we can overcome the naysayers, and secure our right to fix our products.

In 2019, we got bills in front of 20 state legislatures that would help Americans fix their own stuff, rather than having to toss it out and buy new items.

While we got further in 2019 than 2018, we still have our work cut out for us to win a statewide bill. In 2019, we focused on recruiting teams of supporters — repair business, non-profits, tinkerers, STEM educators and more — to back bills in many of these states, training advocates and creating new coalitions. Those coalitions are ready to get back to work in 2020. 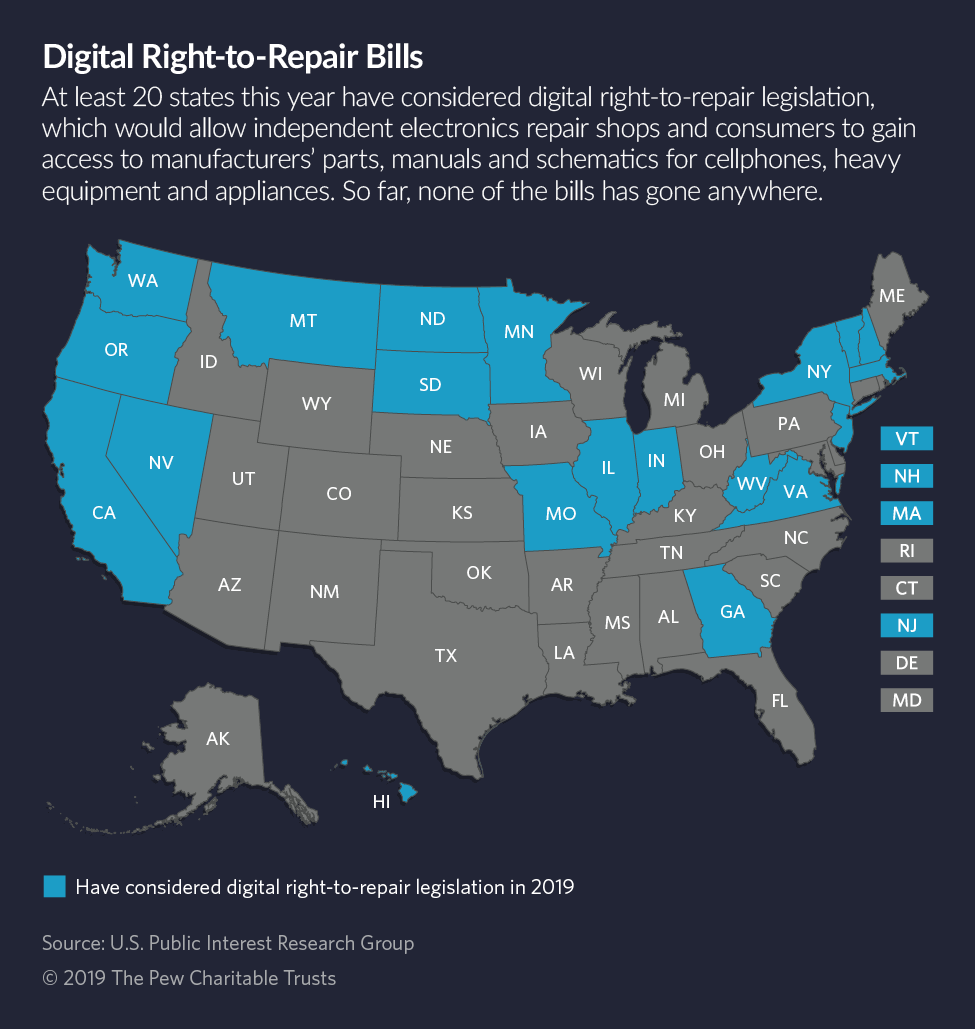 The FTC held a formal workshop in July that explored restrictions on repair, how consumers experience those barriers, and how manufacturers argue against repair. I was a featured panelist.

We highlighted the various barriers to repair, and also how manufacturers often deny warranty claims for anyone with an independently repaired device, although federal laws generally forbid such denials. Read more coverage of the event.

The House Judiciary committee has also started looking into whether large tech companies — including Apple, Facebook, Google and Amazon — are committing potentially actionable anti-trust violations. My questions on Right to Repair were included in those proceedings, and the issues raised were included in questions sent by Rep. David Cicilline to Apple. Apple responded to those questions in November, and their responses further increased the scrutiny on how they discourage or block repair. 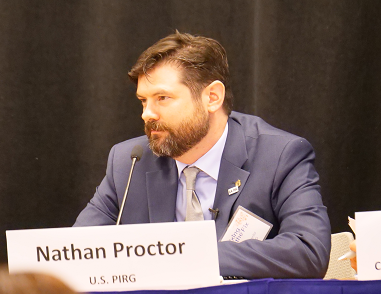 Me at the FTC workshop

Apple and Microsoft have long opposed Right to Repair, and have both received criticism for their efforts to stop Right to Repair reforms from going forward (Microsoft in Washington, Apple in California).

Apple announced a new program in late August that will, for the first time, allow independent repair shops to get access to Apple parts and repair tools. More repair options will mean more things get fixed, but as I told Vice’s Motherboard, “It’s a direct reversal, but big questions remain.”

This fall, Microsoft debuted a new line of Surface products which featured a new modular repairable design. Considering that iFixit gave the 2017 Surface Pro a zero rating on its repairability, this is a dramatic shift. Meanwhile, Apple’s latest desktop computers are also much more repairable than previous editions.

Manufacturers have been using cyber security scare tactics to attack Right to Repair reforms. Working with Paul Roberts of the Security Ledger, we have been raising the voices of experts in information security about the need for Right to Repair reforms. Paul worked to create a new adovcacy group, Securepairs.org, which features some of the leading voices in infosec.

Paul and I spoke on a panel at DEF CON about the importance of Right to Repair and why we need more support from information security experts.

The lack of a right to repair transcends boundaries, so we’re not just fighting back in the United States. A new Right to Repair coalition launched in Europe and notched some victories, and coalitions are growing in Canada, Australia and South Africa as well.

The European campaign has slightly different policy vehicles than our state campaigns in the U.S. I wrote for OneZero about why those differences are important, and increase pressure on manufacturers to address issues of durability and repairability quickly. 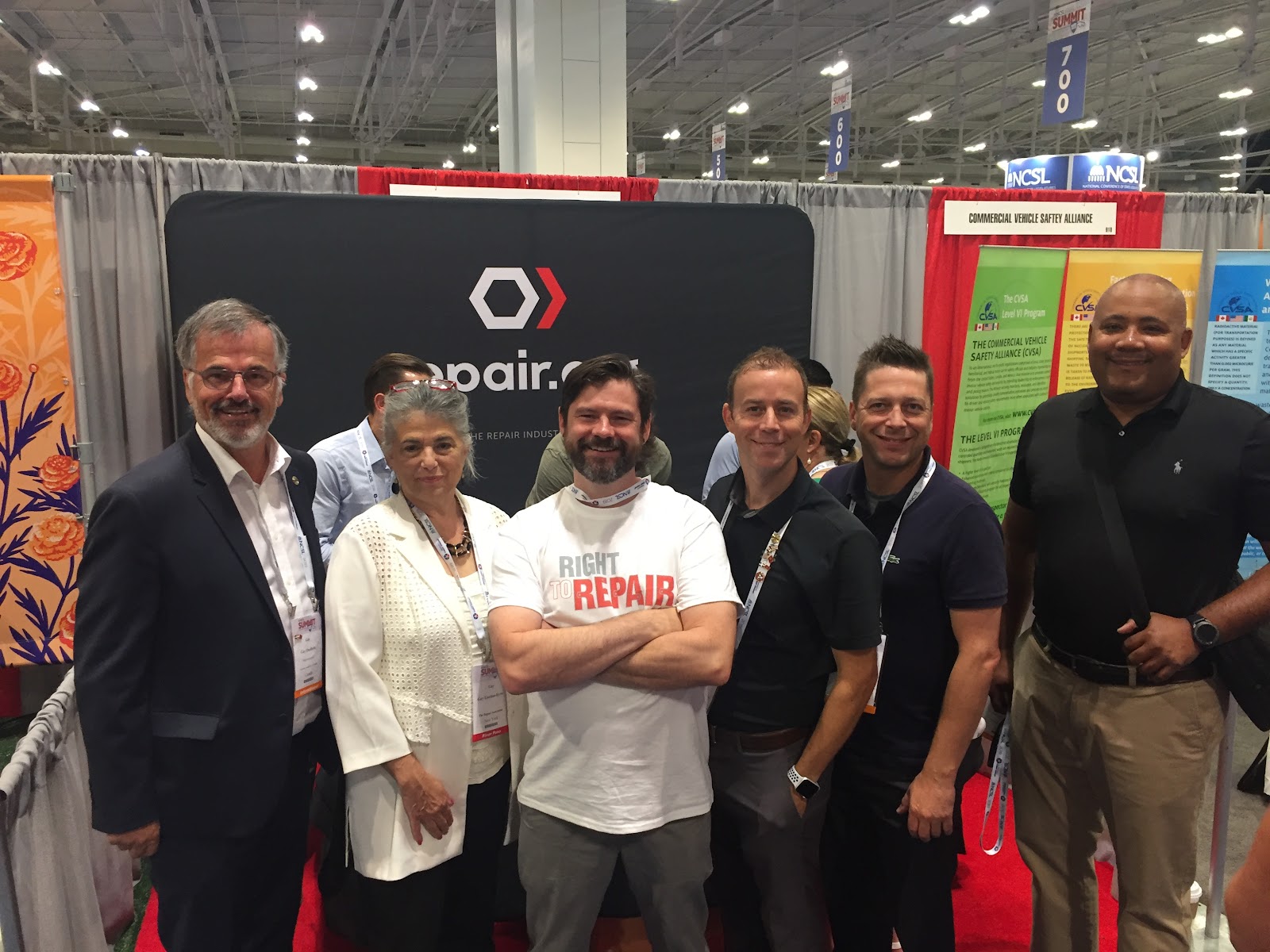 Repair.org’s Gay Gordan-Byrne and I met with a group of Canadian lawmakers in Nashville to discuss strategy. (Guy Oulette, Quebec, far left, Michael Coteau, Ontario on the far right).

After speaking with Gay Gordon-Byrne of Repair.org and me, the New York Times published a fantastic editorial in favor of Right to Repair in the Sunday, April 7, edition. Binyamin Appelbaum wrote for the editorial board:

“An open marketplace for repairs benefits consumers, independent retailers and the environment. Modern devices are increasingly complicated; that concept is not.”

The New York Times editorial built off of endorsements for Right to Repair from prominent U.S. Sen. Elizabeth Warren (MA). As I told Vice News’ Motherboard, which was the first national outlet to cover Sen. Warren’s support, “Right to Repair is a no-brainer, and with 20 states working on active legislation so far this year, it’s no surprise that it’s getting talked about on the national stage. We should be able to fix our stuff.”

Right to Repair is proving hard to Co-opt

In March, I wrote a column for WIRED that predicted: “First they ignore you, then they laugh at you, then they fight you… But then, as a last ditch effort, they co-opt you.”

For example, farm equipment dealers and manufacturers attempted to pitch farmers on accepting a half-measure that would still leave the dealers with control over most repairs. Some of those efforts have been successful: The California Farm Bureau accepted this proposal, much to the chagrin of some of its members.

But a few weeks ago, the Nebraska Farm Bureau pushed back. Bureau delegates approved, by 176-1, a commitment to real right to repair, with clear guidelines that will prevent half-measures from diluting any future agreements.

We expect manufacturers to propose more of these half measures in 2020, especially as we continue to advance legislative reforms. And while we welcome any reforms to help more people fix more things, we will continue to call for a real Right to Repair.

Thank you for helping us in our mission to not only fix our stuff — but fix our throwaway system.