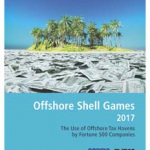 U.S.-based multinational corporations are allowed to play by a different set of rules than small and domestic businesses or individuals when it comes to paying taxes. Corporate lobbyists and their congressional allies have riddled the U.S. tax code with loopholes and exceptions that enable tax attorneys and corporate accountants to book U.S.-earned profits in subsidiaries located in offshore tax haven countries with minimal or no taxes. Often a company’s operational presence in a tax haven may be nothing more than a mailbox.

Overall, multinational corporations use tax havens to avoid an estimated $100 billion in federal income taxes each year. Every dollar in taxes that corporations avoid must be balanced by higher taxes on individuals, less public investments and services, and more federal debt.

But corporate tax avoidance is not inevitable. Congress could act tomorrow to shut down tax haven abuse by revoking laws that enable and incentivize the practice of shifting money into offshore tax havens. This should be the cornerstone of any congressional tax reform effort. Instead, many in Congress are considering proposals that would make offshore tax avoidance worst. By failing to act, our elected officials are tacitly approving a status quo in which corporations don’t pay what they owe, ordinary Americans inevitably must make up the difference.

This study explores how in 2016 Fortune 500 companies used tax haven subsidiaries to avoid paying taxes on much of their income. It reveals that tax haven use is now standard practice among the Fortune 500 and that a handful of the country’s biggest corporations benefit the most from offshore tax avoidance schemes.

Most of America’s largest corporations maintain subsidiaries in offshore tax havens. At least 366 companies, or 73 percent of the Fortune 500, operate one or more subsidiaries in tax haven countries.

Approximately 58 percent of companies with tax haven subsidiaries have set up at least one in Bermuda or the Cayman Islands — two particularly notorious tax havens. Despite the small size of their economies, American multinationals implausibly claim to have earned billions each year in these island nations. In fact, the profits that all American multinationals claimed to earn in Bermuda and the Cayman Islands totaled eighteen times and thirteen times each country’s entire yearly economic output, respectively.

Only 58 Fortune 500 companies disclose what they would expect to pay in U.S. taxes if these profits were not officially booked offshore. In total, these 58 companies owe $240 billion in additional federal taxes. Based on these 58 corporations’ public disclosures, the average tax rate that they have collectively paid to foreign countries on these profits is a mere 6.1 percent, indicating that a large portion of this offshore money has been booked in tax havens. If we assume that the average tax rate of 6.1 percent applies to all 293 Fortune 500 companies with offshore earnings, they would owe a 28.8 percent rate upon repatriation of these earnings, meaning they would collectively owe $752 billion in additional federal taxes if the money were repatriated at once. Some of the most notable cases include: