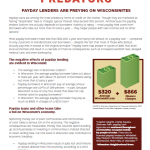 Payday loans are among the most predatory forms of credit on the market. Though they are marketed as having “reasonable” fees or charges, typical interest rates exceed 300 percent. And because the payday lenders’ bottom line actually depends on borrowers’ inability to repay — most payday fees come from borrowers who take out more than 10 loans a year — they target people with low incomes and no other options.

This fact sheet’s key findings include: