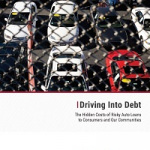 In much of America, access to a car is all but required to hold a job or lead a full and vibrant life. Generations of car-centric transportation policies – including lavish spending on roads, sprawl-inducing land use policies, and meager support for other modes of transportation – have left millions of Americans fully dependent on cars for daily living.

Car ownership is costly, and often requires households to take on debt. In the wake of the Great Recession, Americans rapidly took on debt for car purchases. Since the end of 2009, the amount of money Americans owe on their cars has increased by 75 percent. A significant share of that debt has been incurred by borrowers with lower credit scores, who are particularly vulnerable to predatory loans with high interest rates and inflated costs.

Americans’ rising indebtedness for cars raises concerns for the financial future of millions of households. It also demonstrates the real costs and risks imposed by our car-dependent transportation system. Americans deserve protection from predatory loans and unfair practices in auto lending. Americans also deserve a transportation system that provides more people with the freedom to choose to live without owning a car.

Owning a car is the price of admission to the economy and society in much of America.

 Access to a vehicle is necessary to reach jobs and economic opportunity in much of the nation. Even in the nation’s most transit-oriented metropolitan area, New York City, only 15 percent of jobs are accessible within an hour by transit, as opposed to 75 percent within an hour’s drive. Other cities with less robust transit systems have even fewer jobs accessible via transit.

 Auto dependence is the result of generations of public policy. Since 1956, highway spending has accounted for nearly four-fifths of all government investment in the nation’s transportation system. (See Figure ES-X.) Meanwhile, the embrace of single-use zoning and sprawl-style development separates people from jobs and other necessities, making access to an automobile all but mandatory for the completion of daily tasks.

Owning a car is expensive and drives millions of households to take on debt.

 Transportation is the second-leading expenditure for American households, behind only housing. Approximately one hour of every American’s working day is spent earning the money needed to pay for the transportation that enables them to get to work in the first place.

 More Americans carry auto debt, and they owe more on their loans, than ever before:

 The amount of auto loans outstanding is equivalent to 5.5 percent of GDP – a higher level that at any time in history other than the period between the 2001 and 2007 recessions.

Auto borrowing varies by income, age and location across the United States.

 Residents of Texas owe far and away the most on auto loans per capita of any state in the country, with average auto debt of just over $6,500 in 2017. (See Figure ES-x.)

The loosening of auto credit after the Great Recession has contributed to recent trends toward rising indebtedness for cars, increased car ownership, and reductions in transit use.

 Auto lending rebounded from the Great Recession because of low interest rates (fueled by the Federal Reserve’s policy of quantitative easing) and a perception by lenders that auto loans had held up better than mortgages during the financial crisis. As one hedge fund manager noted in a 2017 interview with The Financial Times, during the recession, “[c]onsumers tended to default on their house first, credit card second and car third.”

 A 2014 report by the Federal Reserve found that a consumer’s perception of interest rate trends had as strong an effect on the decision of when to buy a car as more expected factors like unemployment and income.

 Low-income borrowers are particularly sensitive to changes in loan maturity, according to a 2007 study, suggesting that the longer loan terms of recent years may have been an important spur for the rapid rise in auto loans to low-income households.

 A 2018 study by researchers at the University of California, Los Angeles, tied the fall in transit ridership in Southern California to increased vehicle availability supported by cheap auto financing.

The rise in automobile debt since the Great Recession leaves millions of Americans financially vulnerable – especially in the event of an economic downturn.

 Americans are carrying car loans for longer periods of time. Of all auto loans issued in the first two quarters of 2017, 42 percent carried a term of six years or longer, compared to just 26 percent in 2009. Longer repayment terms increase the total cost of buying an automobile and extend the amount of time consumers spend “underwater” – owing more on their vehicles than they are worth.

 Many car buyers “roll over” the unpaid portion of a car loan into a loan on a new vehicle, increasing their financial vulnerability in the event of job loss or other crisis of household finances. At the end of 2017, almost a third of all traded-in vehicles carried negative equity, with these vehicles being underwater by an average of $5,100.

 The increase in higher-cost “subprime” loans has extended auto ownership to many households with low credit scores but has also left many of them deeply vulnerable to high interest rates and predatory practices. In 2016, lending to borrowers with subprime and deep subprime credit scores made up as much as 26 percent of all auto loans originated.

 Auto lenders – and especially subprime lenders – have engaged in a variety of predatory, abusive and discriminatory practices that enhance consumers’ vulnerability, including:

 Providing incomplete or confusing information about the terms of the loan, including interest rates.

 Making loans to people without the ability to repay.

 Pushing expensive “add-ons” such as insurance products, extended warranties and overpriced vehicle options, the cost of which is added to a consumer’s loan.

 Engaging in abusive collection and repossession tactics once a consumer’s loan has become past due.

Americans should not face crippling debt or abusive practices in the marketplace to secure the transportation they need. By expanding transportation options and strengthening consumer protections for auto borrowers, local, state and federal governments can protect households from the financial vulnerability created by automobile debt.

To protect consumers in the automotive marketplace, policy-makers should limit abusive, predatory and discriminatory auto sales and lending practices, including by:

 Requiring lenders to determine ability to repay before issuing a loan;

 Addressing the inherent conflicts of interest present in indirect lending through auto dealers, and expanding options for responsible lending to low-income Americans.

To expand transportation options and enable more Americans to live without owning a car, policy-makers should:

 Improve conditions for people who walk or bike;

 Incentivize carpooling, and encouraging the deployment of shared mobility services such as carsharing that reduce the need for personal car ownership;

 Adopt land use and economic development policies that encourage the location of homes and jobs in areas accessible to public transportation.

Ringing in our fears

Ringing in our fears