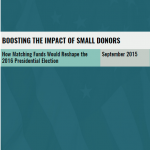 With more than a year to go before voters cast their ballots for the next President of the United States, the race among candidates to build the biggest campaign war chest has already set records. The vast majority of the funds raised for the 2016 election have come from wealthy donors making contributions exponentially larger than most Americans can afford, typically to super PACs and other organizations that can legally accept donations of any size.

This report examines how the 2016 presidential race would be reshaped by a public financing system that amplifies the voices of small donors in our elections. The 2016 election will likely break all previous campaign spending records. But more important than the amount of money spent is where that money is coming from. Under our current system, courting wealthy mega-donors – who often have different priorities and policy preferences than most voters – has taken precedence over appealing to everyday Americans.

It doesn’t have to be that way. What if our campaign finance system encouraged candidates to raise money from everyday citizens making small contributions? This report examines how the 2016 fundraising picture through the July Federal Election Commission (FEC) filing deadline would look if a small donor campaign finance system were in place, where small contributions were matched with limited public funds for candidates who agree to turn down large contributions.

This analysis demonstrates that under such a system, candidates relying on large donors would have a powerful incentive to shift their fundraising strategy to focus on small donors, and access to a narrow set of wealthy donors or vast personal wealth would not determine the viability of a presidential campaign.