Here’s a quick roundup of your rights concerning flight delays, cancellations, and what to do if the airline loses your bag. If the company fails to respond promptly, file a complaint with the DOT at http://www.dot.gov/airconsumer/file-consumer-complaint.

After new, PIRG-backed rules went into effect in 2011, airlines can’t keep planes on the tarmac for more than three hours without facing massive fines. After two hours, the airline must provide food, water, necessary medical attention, and functioning toilets.

If your flight is delayed over 30 minutes, the airline must regularly keep you posted on its status.

There are no rules governing compensation for delayed flights, but you should ask the airline if they will pay for meals while you are stuck in the airport or ‘endorse’ the cost of your ticket toward a flight with another airline. Policies vary according to the individual airline and the reason for the delay, such as weather or mechanical problems.

If your flight is cancelled or delayed over two hours and you choose to cancel, the airline is required to refund the cost of your ticket, even if it is a nonrefundable ticket. In many cases, the airline will book you on the next flight to the same destination.

If your bag does not arrive, report it immediately to your airline in the airport. Keep your ticket, give them info for how to contact you, and make sure you know how to follow up with them.

The airline should reimburse you for reasonable expenses if your luggage is delayed, so keep receipts for things like a toothbrush or a change of underwear. Spirit Airlines even requires you return dirty clothes you purchased in order to be reimbursed.

If bag is lost, the airlines should refund any fee you paid to check the bag and should also reimburse you for lost items. File a claim with the airline as soon as possible and have information about how to follow up. The maximum an airline will pay to reimburse for luggage is $3,300 on domestic flights.

Report damage to your baggage as soon as you find it, or at least within 24 hours. Airlines vary in their individual policies, but they should compensate you for damaged bags. Make sure you have information about how to follow up with the airline before you leave the airport.

Since not everyone scheduled shows up for most flights, airlines usually sell more tickets than they have seats on a flight. On rare occasions, everyone shows up and the airline has to deny boarding to someone with a ticket, which is referred to as involuntary bumping. If you are bumped involuntarily, you have rights, depending on how much of a delay you experience after the airline rebooks you: 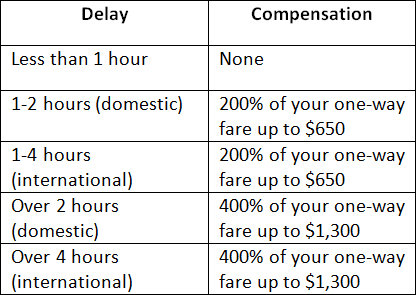 A full description of your rights and exceptions to the policies are available here.

More common that involuntary bumping, airlines often ask passengers scheduled to fly on a certain flight to voluntary bump themselves and allow someone flying standby to take their seat.

Policies vary by airline, but usually the airline will book a voluntarily bumped passenger on a later flight that day and offer some sort of additional compensation, such as a meal in the airport or credit to use with the airline. Make sure you understand the airline’s offer before agreeing to bump yourself voluntarily.