Printed in the Belmont Citizens Forum

By Janet Domenitz and Morgan Molloy

Creating positive change for our climate in everyday life can be daunting, but there are ways we in the Commonwealth can make progress in the here and now. Reducing the waste we discard in landfills and incinerators reduces pollution and climate emissions. One key to reducing waste disposal is enforcing our decades-old waste ban regulations.

Of the 5.6 million tons of waste we dispose of in Massachusetts each year, approximately two million tons (~40%) are banned from landfills and incinerators by Massachusetts Department of Environmental Protection (DEP) regulations. Some examples of banned materials are paper, cardboard, glass, metal, and wood. These waste bans exist, according to the DEP, to “increase recycling and support the recycling economy, which provides thousands of jobs and millions of dollars in economic activity in Massachusetts.” Unfortunately, despite waste ban regulations that have been in place since the 1990s, banned items are commonly found in our landfills and incinerators. Zero Waste Massachusetts is launching an effort to reduce banned items from the disposal in coalition with several other organizations.

No silver bullet will solve this problem; we need to employ a mix of different tactics. In Zero Waste Massachusetts’ recent report, Enforce the Bans, we make several recommendations.

Add MassDEP waste ban enforcement staff and hold waste haulers accountable by issuing non-compliance orders and fines to violators. We need people working to address this problem specifically. If violators big and small are held accountable, then we only stand to benefit. 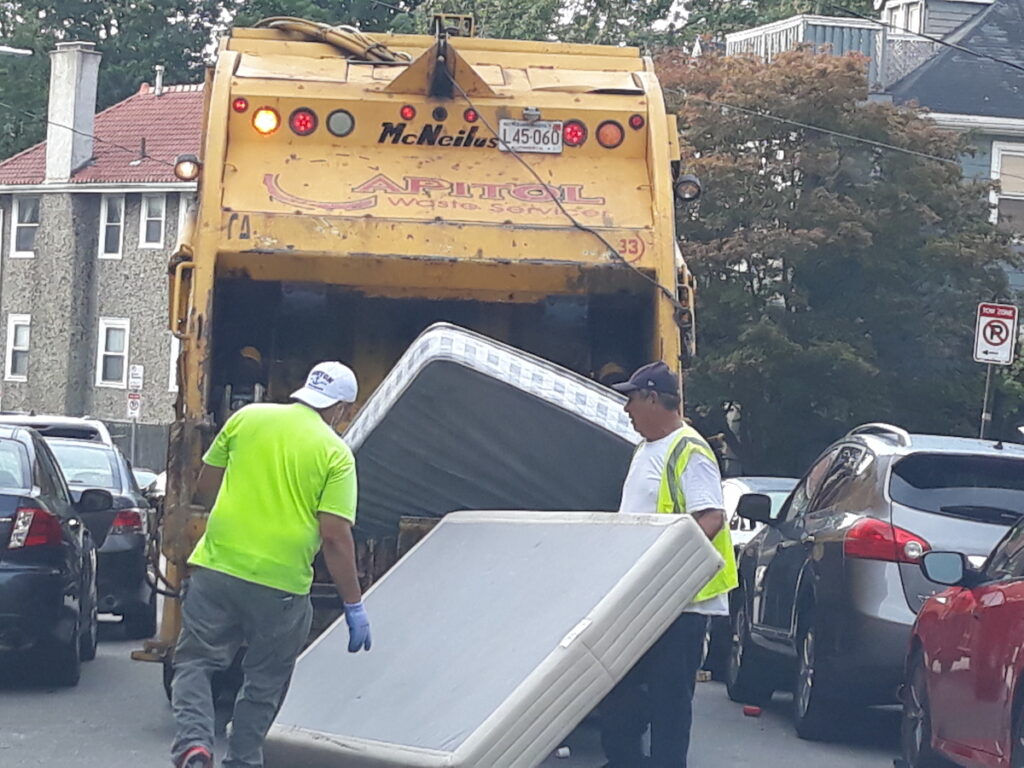 Separate our waste from recycling and composting

Provide separate bins for residential and commercial buildings to separate our discarded materials. If towns and cities around the state provide separate trash, recycling, and compost bins, then it is a breeze for you at home or work to separate what you need to throw away.

State and local governments should educate decision makers and the public, in multiple languages, about what can and should be reduced, reused, recycled, or composted versus what is acceptable as trash. In Belmont, this guide is available at www.belmont-ma.gov/dpw-highway-division/pages/recycling-trash-information (albeit only in English). Other towns, cities, and state agencies should provide easy-to-find and easy-to-read directions about reducing and what to do with your waste.

To make a difference at home, use a clear trash bag so the contents can easily be seen and checked for banned items.

We know enforcing the waste bans will take effort, but this is not a complicated or a need-to-invent-new-technologies problem. Nantucket instituted their own waste bans more than 20 years ago, and only 12% of banned items end up in landfills and incinerators. (We discuss their strategies in the report, Enforce the Bans.) The state of Vermont, whose program is less than four years old, is at 35%.

Studies show that creating and disposing of stuff is one of the most significant contributors to climate change after energy and transportation. We could make a big dent in our disposal in Massachusetts by launching an all-out effort to reduce that two million tons of reusable and recyclable materials—long banned by the DEP—from ending up in landfills and incinerators.

Janet Domenitz is the executive director of MASSPIRG and a Belmont resident. Morgan Molloy is an associate with MASSPIRG.