PLANTING SEASON IS A busy time for Missouri farmer Jared Wilson. “I’m working around the clock—sometimes 22 hours a day—to get seed in the ground. There is a finite window. Any seed we don’t plant in that window means less crop come harvest.”

This study has three main findings:

Farmers want to fix their own equipment

WITHOUT ACCESS TO THE repair parts, tools, software and information needed to fix modern equipment to such tools, farmers are reliant on dealership technicians, leading to delays in service  and high repair costs. Frustration with this ace has farmers across the country calling for Right to Repair reforms.

A new survey by U.S. PIRG Education Fund and National Farmers Union demonstrates the popularity of Right to Repair among farmers. Of the 74 farmers across 14 states surveyed, 95% support Right to Repair.

Such support has caught the attention of decision-makers. Right to Repair reforms have been introduced in state legislatures across the country, included in an executive order issued by President Joe Biden, and most recently put before the U.S. Senate through the Agricultural Right to Repair Act, championed by Sen. Jon Tester of Montana.

Yet concrete change still eludes farmers and advocates. Faced with this reality, Wilson called his closest dealership to send out a technician who would have access to the necessary tools. That technician ordered a replacement exhaust harness, which took a day to arrive. Another day that Wilson could not use his tractor to plant.

The technician came back the next day, installed the part and cleaned off the plug that connects the part to the Engine Control Unit (ECU). This allowed the tractor to perform a service regeneration, a process activated by dealer-exclusive tools, that parked the tractor for four hours. More time lost.

Despite the temporary fix, Wilson said the repair tech failed to get to the root of the problem—an intermittent failure along another part that was installed post-production to address a manufacturing defect. So, the problem came back later that night.

Access to a Deere system called Dealership Technical Assistance Center (DTAC) would have allowed him to see that the manufacturing defect was identified through what is called a Product Improvement Program (PIP), leading to the installation of the part he believed to be at fault. Right to Repair reforms would enable farmers and independents to access tools like DTAC themselves.

But the technician didn’t look at DTAC and therefore didn’t identify the PIP, Wilson said. Because Wilson could not get access himself, he said he had to resort to another method.

“I got out on the tractor, I found the harness that went to all these things, and I just started jiggling on it because sometimes that actually works. I jiggled around on it enough that I got it to do a parked regeneration,” Wilson told U.S. PIRG. “I wasn’t going to call those yo-yos to come work on the damn thing again and lose a couple more days, so I just kept jiggling that thing every 8 to 10 hours when I needed to regenerate my tractor.”

While this labor-intensive workaround helped Wilson get through the planting season, the problem is not fully fixed.

“I have this on another tractor that I’m having the exact same issue with, except that hasn’t done the regeneration issue yet, but it’s just a matter of time. And I don’t have any way to fix it,” Wilson lamented. “The dealer techs are mostly fine people doing their level-best in an awful system. But that doesn’t help me repair my equipment.”

IN ADDITION TO THE DELAYS and frustrations that come along with manufacturer-imposed repair restrictions, farmers complain of high costs from the pervasive business model of dealer-only repair.

One New Mexico farmer informed U.S. PIRG Education Fund and National Farmers Union that it took three replaced sensors and an $800 repair bill to clear an error code, when a simple, “50-cent O-ring would have got the tractor running again with the proper diagnostics.”

Michael Kovach, a farmer from Pennsylvania, said that, “the [diesel exhaust fluid] system in our newer (2019) Massey went awry, and idled the tractor all the way down in the middle of a hayfield. Service tech showed up in a couple of hours in a well-equipped repair truck, plugged his laptop into the service port on the tractor, ran a regen cycle, and fixed it without ever touching a wrench. I have a laptop. And a phone with the capacity to run apps. I could have done it without any delay or expense, if it were an option.”

These stories are common: 92% of farmers surveyed believe they could save money if they had better access to independent repair or could make all repairs themselves.

FOR MANY FARMERS, the features in modern agricultural equipment are not worth the headaches. Of the farmers surveyed, 77% indicated that they had bought older-model equipment to avoid the software in newer equipment. This practice has caused older tractors to sell for unprecedented prices, such as a 1980 John Deere 4440 that sold for $43,500 in Lake City, Minnesota in April 2019.

Scott Potmesil, who lives in western Nebraska’s Sandhills region, is one of these farmers. He bought a 1995 John Deere 7800 series tractor because his independent mechanic can work on it. That mechanic charges $45 to $55 less an hour and is 15 miles closer to Potmesil’s farm than his closest dealership, he said.

“I have to drive by [my mechanic’s] place to take my tractor to my dealership in town to be fixed. And it’s frustrating. I trust him. I work well with him. I’m happy with the work when it’s done there as opposed to the dealership,” Potmesil said.

But opting for older equipment comes with a tradeoff. “I’m giving up 25 years of technology—I’m going backward on equipment just so I can afford to repair it,” he told U.S. PIRG. “It’d be nice to upgrade to new stuff that my mechanic could work on. But I’m going backward.”

FARM EQUIPMENT manufacturers insist that they have heard farmers’ concerns and are addressing the problem. John Deere CTO Jahmy Hindman told The Verge, “we have and remain committed to enabling customers to repair the products that they buy. The reality is that 98% of the repairs that customers do on John Deere products today, they can do.”

Farmers aren’t buying it. “My experience here in the real world of working on this stuff is that that’s absolutely not true,” Wilson told U.S. PIRG. “I guess if you included every single thing that could break on a machine, that might be true, but there’s no way in hell that that’s true for common things that break.”

A February 2021 investigation by U.S. PIRG Education Fund and VICE found it nearly impossible to purchase even basic diagnostic tools from John Deere dealerships.9 Dealers have since publicized access to certain software tools, and a few have started listing the tools on their websites.

But those tools are not comprehensive. “I rented Deere’s Customer Service Advisor,” Wilson said. “It will provide you piecemeal access, but it’s not enough to cover their entire ecosystem. And for a significant number of repairs, they find the solutions within DTAC or within the emissions module—which I can’t access—so I cannot fix those problems with emissions on a John Deere machine without their software, without calling them.”

This problem has led a group of farmers to file a class action lawsuit against John Deere. The suit alleges that Deere’s implementation of computerized engine control units and refusal to provide farmers and independent mechanics with needed software repair tools have forced farmers to pay millions more for service than they would have in a competitive market.

Until comprehensive tools are available to farmers and independent mechanics, they will continue to be reliant on dealership technicians and continue to endure frustrations, delays and high repair costs.

Farmers need the Right to Repair

MANUFACTURER-IMPOSED repair restrictions lead to costly delays, exorbitant repair bills and unnecessary frustrations for farmers. Policy changes, most importantly, Right to Repair reforms, would inject competition into the repair market by providing individual farmers and independent mechanics with access to needed repair materials at a fair and reasonable price. Legislators should enact policies like those already introduced in more than two dozen states and the U.S. Senate to give farmers the repair choice they deserve. 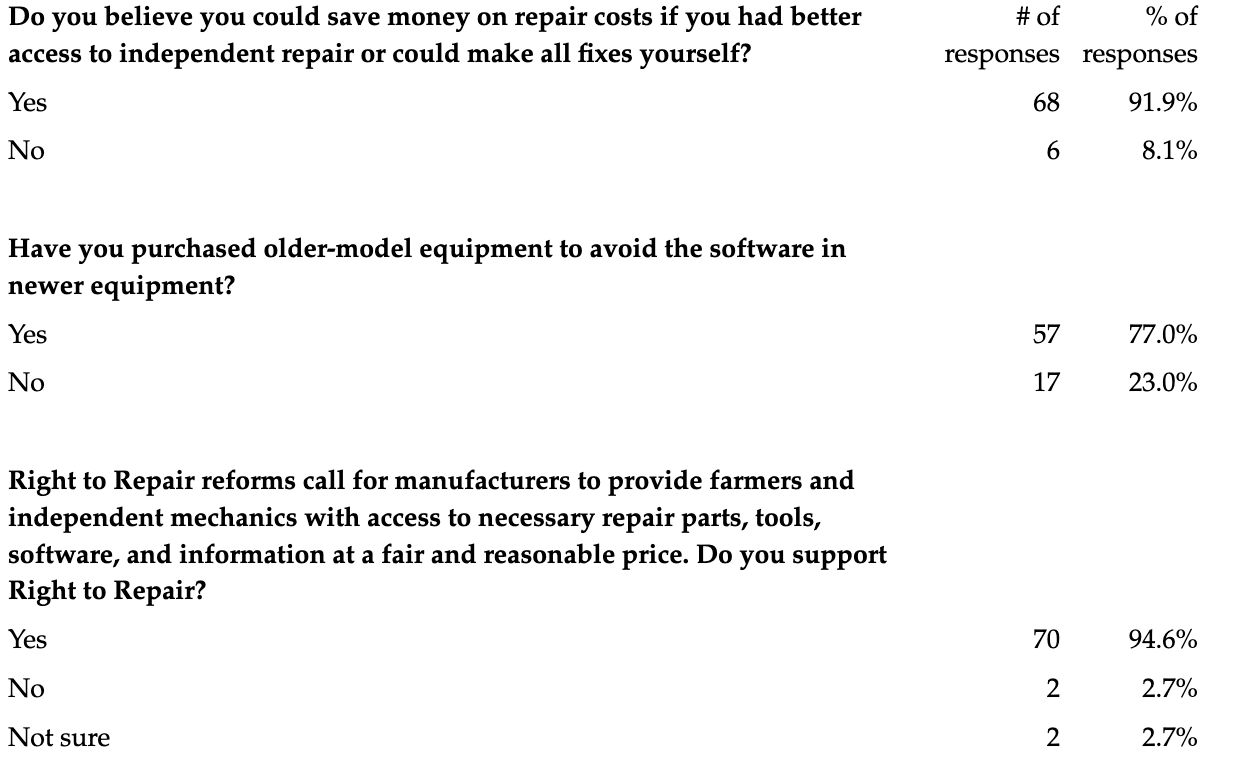 THIS SURVEY WAS TAKEN by 74 farmers and was conducted online from August to November 2021. A link to the survey form was sent by National Farmers Union to state Farmers Union organizations, some of which sent the survey onto their membership. Farmers who took the survey were also encouraged to share the survey with their farmer neighbors and friends. Participation was voluntary, and all data was self-reported by respondents. The survey collected additional information about the respondents beyond what is covered in this report.

Kevin helps run U.S. PIRG's Right to Repair campaign. He got his start as a Green Corps organizer, where he worked with Mighty Earth to call on Bridgestone to stop deforestation and human exploitation for natural rubber. He also led an effort to get a majority of both houses of the Massachusetts state Legislature to co-sponsor the 100% Renewable Energy Act. Kevin lives in Somerville, Massachusetts, where he enjoys reading, running and rooting for his Oakland A's from afar.

Why Farmers Need Right to Repair

Why Farmers Need Right to Repair