Recently, Governor Polis unveiled his budget proposal that included over $250 million in clean travel option investments to help “meet the moment” around the dangerous air pollution we’ve been experiencing.

He picked some smart categories to invest in at a time when we need to think and invest big to tackle air pollution.

We cannot afford another summer of ozone alerts and missed air quality deadlines like we had last summer. While smoke from more extreme fire seasons fueled by climate change is a factor, we know local sources of ozone pollution, like gas-powered vehicles, are a predominant cause of our air pollution problems.

The good news is that in the transportation sector, solutions that reduce the pollution that fuels ozone days are often solutions that cut greenhouse gas emissions.

The Polis administration has taken critical steps in the last few years to reduce air pollution including adopting the Zero Emission Vehicle (ZEV) and investing dollars in electric vehicle charging infrastructure, which will result in more clean, electric-powered passenger vehicle options for Coloradans.

The Polis administration has also expanded statewide transit options including Bustang, Snowstang, and the soon-to-be-launched Pegasus route along I-70 in the mountains and launched an innovative Main Streets program that is investing in ways to make our main streets more people-friendly.

Despite these steps, this summer’s air pollution made it clear that more needs to be done to meet this moment. A key strategy for tackling our air pollution problem is to significantly expand clean travel options so more Coloradans can complete trips without driving a gas-powered vehicle.

Here’s what’s in Polis’s budget proposal, which will need to pass through the Colorado legislative process in the upcoming 2022 session that begins January:

E-bikes: The proposal includes $12 million to expand access to e-bikes, a solution that replaces trips by car and brings with it additional benefits including much lower transportation costs than owning and operating a passenger car, health benefits from the associated exercise and a much smaller footprint in our urban areas, freeing up limited street space. Nearly 50% of trips in the DRCOG region are less than three miles, a distance that can be covered with an e-bike. The impact of the $150M will depend on the program details, but CoPIRG estimates it could fund 1,250 buses at 100% of the difference in cost between a traditional diesel bus and new electric bus. This comes on top of the recently passed federal infrastructure bill, which sets aside at least another $2.5B nationally for electric school buses. Based on Colorado’s population, we estimate the federal dollars could fund an additional 119 buses at the full difference in cost. 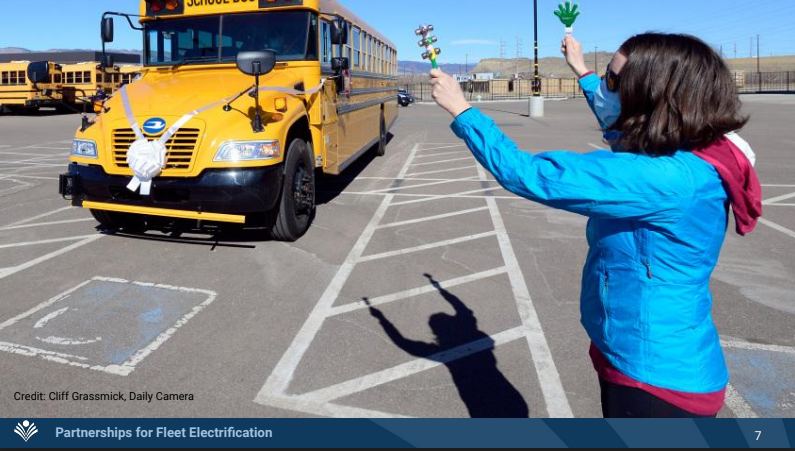 Clean Trucks: The proposal includes $15M to support low emission trucks through incentivizing the retirement and replacement of older, diesel trucks. Diesel trucks are a major source of particulate and ozone pollution. In the Denver Metro area, MHDVs account for less than 2% of all vehicle miles traveled, but contribute 24% of on-road NOx emissions. I’m excited to learn more about how these dollars will be used to achieve the goal.

Main Streets: Since it was created, I’ve been a huge fan of the Main Streets program in Colorado. In August, we lifted up some of the proposed projects in a series of interviews with local government leaders.

From multi-use paths to bike lanes, sidewalks to safety improvements at intersections, these smaller investments can be life-saving for the hundreds of thousands of people who live on the arterials and main streets that are also state highways and usually locations of a lot of crashes and fatalities (sometimes called the high-injury network).

Another $40 million will allow for dozens of additional improvements that can help tip the balance for people to comfortably walk, bike, roll, and take transit to complete more trips. 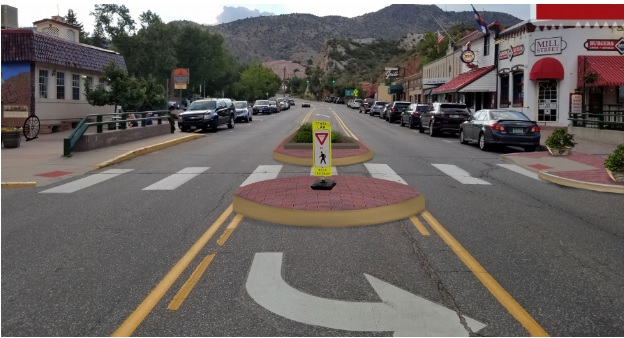 Transit Fares: The Governor’s budget also proposes $28 million for ozone season transit fares. Reducing or eliminating the fare for riding transit on days with ozone alerts removes one of the barriers for people to leave their cars at home and ride transit. A recent paper by the Victoria Transport Policy Institute suggests that a large fare reduction would be required to attract new riders since they are discretionary.

No one policy or budget proposal will provide everything we need to solve our air pollution problem. The next big investment we need to make is around expanding transit service and recruiting people to ride transit in the regions of our state suffering some of the worst air pollution including the nonattainment area from Denver up to Fort Collins and Greeley.

We cannot hit our climate and air pollution goals without a significant increase in the number of people who consistently use transit to complete trips instead of driving. Even in the most optimistic electric vehicle scenarios, there is over 3 million metric tons of additional greenhouse gas emissions from the transportation sector that will need to be cut in the next 8 years according to the Greenhouse Gas Pollution Reduction Roadmap.

In addition, in CDOT’s cost and benefit analysis for their draft greenhouse gas rule, they estimate that transit vehicle revenue miles will need to grow by 6 percent a year through 2030 to hit the proposed pollution reduction goal.

From an ozone perspective, transit is also a critical tool because, with the right strategies, transit service and increased ridership could be ramped up fast to meet the next ozone season, which is just over six months away, as well as the ones immediately after that.

Better transit service is a critical tool for recruiting people to ride. The Victoria Transport Policy Institute found that in addition to lower fares new riders may be even more responsive to an increase in service.

I came out of my office in downtown Denver to discover I had a flat tire and no spare. It was 6pm on a Monday. I live within a few blocks of two different RTD bus routes that pass near my office so I looked up the schedule. Unfortunately, at 6pm in the evening, neither route had a bus passing me within the next 30 minutes. It was a frustrating experience. While it would have helped if those buses were free, the low frequency did not recruit me to change my travel habits and ride more in the immediate future.

My story is not unique.

According to Denver Moves: Transit Plan, more than 70% of Denver residents live within convenient walking access to transit (i.e., quarter-mile walk to a bus stop or a half-mile walk to a light rail station). But if those buses and trains aren’t coming every 5-10 minutes, it’s not a great option.

Given my experience, I would be more likely to ride transit if it came more often and was therefore more reliable. In Denver, the TransitCenter found a 40% increase in transit service would significantly expand the number of routes that come every 15 minutes or less. 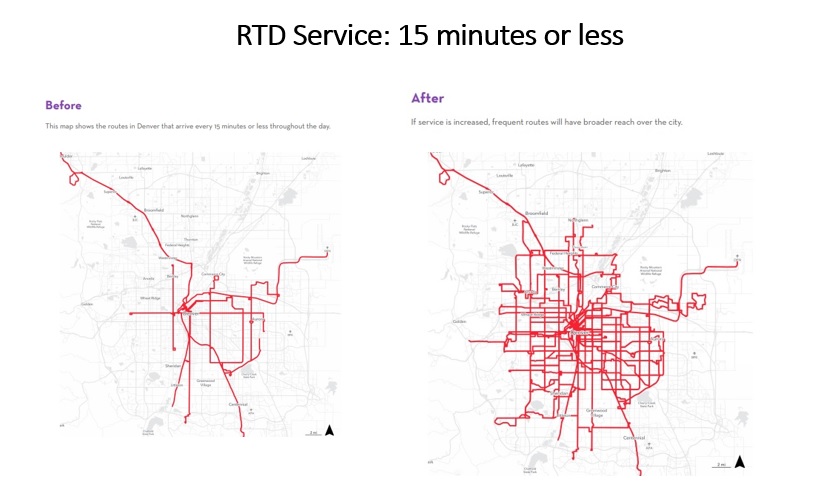 RTD service before and after 40 percent increase: Source TransitCenter

Before COVID, a few cities saw increased population growth but were able to reduce trips by cars anyways including Minneapolis and Seattle. Both saw big increases in the number of people who had access to frequent transit service. Seattle in particular increased bus service by 270,000 hours and increased the percentage of residents within a 10-minute walk of 10-minute or better transit service from 25% in 2015 to 64% in 2017. 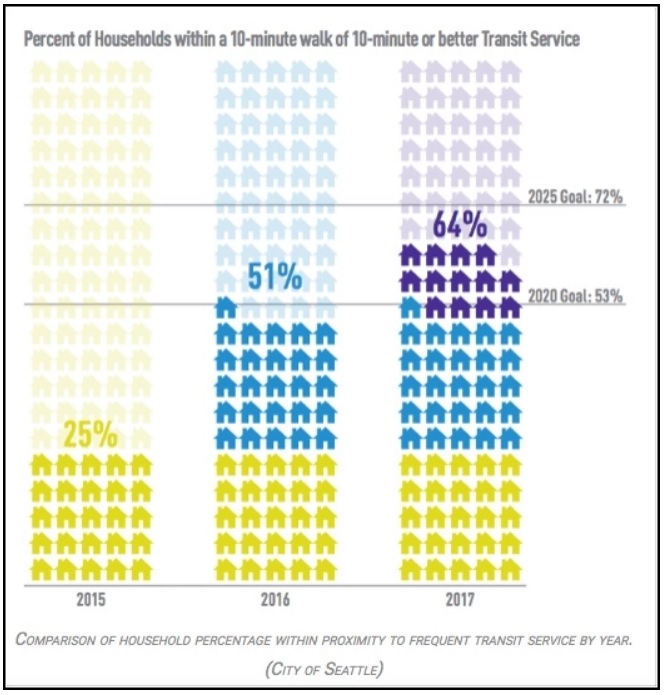 That’s why the next big investment we need to make is in transit service, also called transit operations, so we can increase the frequency of bus service, especially in urban areas where increased transit service can maximize the amount of people we can move without a car and reduce pollution.

We’ll need hundreds of millions of new dollars per year to fully fund transit service in the way that we need to in the Denver region and along the Front Range. In Minneapolis and Seattle, local communities banded together to raise significant funding for their transit system, similar to what Denver regional voters did in 2004 around FasTracks.

Even with the new dollars available from federal and state sources, it would not be enough nor would it be consistent to solve our transit service problems.

However, a strategically focused increased investment in transit operations and service now along corridors and in areas that can see the biggest boost in ridership would be smart.

It is the most significant clean transportation strategy missing in the Governor’s proposal and could result in meaningful shifts in ridership as I mentioned above. But it also could help demonstrate the kinds of transit improvements that would be possible with new service dollars, helping to pave the way for a regional effort to significantly increase funding.

Currently, there is a lot of “one-time” funding available that is not designed to support an increase in ongoing operations. However, as with fare free transit in the Governor’s proposal, now is not the time to let the lack of ongoing funding stop us from investing in ways that can recruit transit riders and cut air pollution even in a short time span.