The Chain Reaction V report and scorecard ranks America’s top restaurant chains on their policies relating to antibiotic use in their beef supply chains. The overuse of antibiotics on industrial farms contributes to antibiotic-resistant bacteria, which can cause life-threatening infections in people. We need our life-saving medicines to work, and because fast food companies are some of the largest buyers of meat, they are uniquely positioned to address this public health crisis.

Top performers Chipotle and Panera Bread earned an “A” and “A-” respectively for the 5th year in a row. 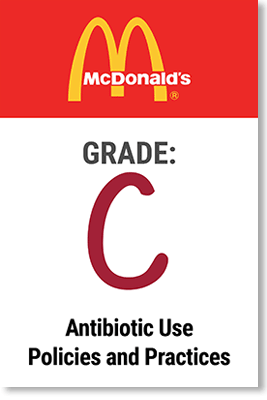 McDonald’s earned the “Biggest Moover” award and a “C” grade for committing to reduce antibiotic use in its beef supply. Wendy’s earned the ‘Biggest Wanna-be’ award and a “D+” grade for taking only minor steps to reduce antibiotic use in its beef supply. Taco Bell earned a “D” grade for committing to reduce medically important antibiotic use by 25% in its beef supply chain by 2025.

The remaining chains received an “F” for not establishing policies to restrict antibiotic use in their beef supply chains.

The growth and spread of antibiotic-resistant bacteria is a global health crisis, threatening to create a future in which common infections could once again become life-threatening on a large scale. The World Health Organization (WHO) and the Centers for Disease Control and Prevention (CDC) consider antibiotic-resistant bacteria among the top threats to global public health, and the CDC estimates that each year, at least 23,000 Americans die from resistant infections.[1] Another estimate suggests it could be seven times as many, accounting for more than 160,000 annual deaths.[2]

The overuse of antibiotics in livestock production significantly contributes to the spread of antibiotic resistant bacteria.[3] The more antibiotics are used, the more opportunities resistant bacteria have to multiply and spread. Approximately two-thirds of the medically-important antibiotics sold in the U.S. go to food animals.[4],[5],[6] Many meat producers routinely give the drugs to animals that are not sick to prevent diseases caused by factory farm production practices.[7] Despite the threat posed to public health, the U.S. lacks effective laws and policies to prevent the overuse of antibiotics in agriculture.

Fast food restaurants, as some of America’s largest meat buyers, can play an instrumental role in pushing meat producers to use antibiotics responsibly. In fact, previous editions of Chain Reaction have documented how the nation’s top restaurant chains have stepped up their commitments to source chicken from producers that raise animals without the routine use of antibiotics.[8] These corporate actions have helped move the chicken industry toward more responsible antibiotic use practices. A recent industry estimate shows that in 2018 more than 90 percent of U.S. broiler chickens were raised under programs that don’t use medically important antibiotics as defined by the FDA, and more than half didn’t use any antibiotics at all.[9]

Although there is massive progress in the chicken industry in response to such consumer demand, many fast food restaurants have failed to make meaningful commitments to address antibiotic overuse in their beef supply chains. This is concerning because in 2017, the beef sector accounted for 42 percent of the medically-important antibiotics sold to the meat industry — more than any other meat category.[11] By contrast, five percent of all medically important antibiotic sales to the meat sector went to the chicken industry.

This year’s Chain Reaction report and scorecard therefore focuses on antibiotic use policies and practices for beef sold in the top U.S. fast food and fast casual chains. Though not our primary focus, Chain Reaction authors also surveyed and reported on progress related to antibiotic use across all meat and poultry supply chains of the nation’s top fast food and fast casual restaurants.

Burger chains especially have a crucial role to play in reducing antibiotic use. To protect public health and push the beef industry to eliminate the overuse of antibiotics, restaurants — especially burger chains — should commit to sourcing beef from producers that use antibiotics under the guidance of a licensed veterinarian, and only to treat animals diagnosed with an illness or in limited circumstances to control a verified disease outbreak. So far, however, few have done so.

Our survey showed that only two chains, Chipotle and Panera Bread, source beef raised without the routine use of antibiotics. Most other chains have no established policy restricting antibiotic use in their beef supply chains.

Shortly after Chain Reaction IV was released, McDonald’s announced a commitment to monitor and reduce medically important antibiotic use in its beef supply. This action by the nation’s largest beef purchaser bumped McDonald’s from an F to a C in this year’s report and earned it the “Biggest Mooover” award. Wendy’s, on the other hand, continues to take very small steps forward to reduce antibiotic use in its beef supply chain, which earned the company a D+ and the “Biggest Wannabe” award this year. Wendy’s should follow McDonald’s lead in committing to a comprehensive antibiotic use policy. Call on Wendy’s to hold the antibiotics

Call on Wendy’s to hold the antibiotics

McDonald's recently committed to monitor and reduce the use of medically important antibiotics in its beef supply chain. Wendy’s, the third largest burger chain in the United States, can build on that progress by phasing routine antibiotic use out of its entire beef supply chain.

[4] U.S. Food and Drug Administration (hereinafter FDA), Center for Veterinary Medicine, 2016 Summary Report on Antimicrobials Sold or Distributed for Use in Food-Producing Animals, December 2017, https://www.fda.gov/AnimalVeterinary/NewsEvents/CVMUpdates/ucm588086.htm. Data on 2015 sales of antibiotics for human medicine in the United States were obtained from Eili Klein of the Center for Disease Dynamics, Economics & Policy (CCDEP). Klein also provided data for years prior to 2015 in Kar, A., and Klein, E. “Animal Antibiotic Sales Finally Drop, but Much Work Remains,” Natural Resources Defense Council (hereinafter NRDC), December 2017, https://www.nrdc.org/experts/avinash-kar/animal-antibiotic-sales-finally-drop-much-work-remains. CDDEP also provided those figures for years preceding 2015; 2016 data are not yet available.

[11] FDA, Center for Veterinary Medicine, 2016 Summary Report on Antimicrobials Sold or Distributed for Use in Food-Producing Animals, December 2017, https://www.fda.gov/AnimalVeterinary/NewsEvents/CVMUpdates/ucm588086.htm.