SACRAMENTO, Calif.  — Sen. Susan Talamantes Eggman introduced on Monday SB 983, a bill to provide Californians the resources they need to fix electronics and keep electronic waste off the scrap heap. Similar to other repair legislation around the country, the bill would address the growing problem of unrepairable consumer and electronic products, ranging from cell phones to home appliances.

The bill is sponsored by CALPIRG, and is supported by a coalition of local repair businesses, consumer advocates and environmental protection groups. Coinciding with the bill’s introduction, CALPIRG released a survey demonstrating bipartisan support across California for “Right to Repair” legislation.

“It’s absurd that every day we throw away some 46,000 cell phones in California,” said Sander Kushen, advocate for CALPIRG. “And that’s just the tip of the iceberg. When we throw out an electronic product that can be repaired, we contribute to the fastest growing waste stream in the world.  Too often, companies get in the way of consumers who want to fix their things. The result is higher consumer costs and more toxic electronic waste.”

“The ability to fix the things that we own, through our own hands or those of a trusted independent repair shop, should not be a controversial or partisan issue,” Sen. Eggman said. “Improving the access to replacement parts and the safety of repairs with appropriate service documentation will give consumers the choice to save some money and keep their electronics and appliances a little longer before they must be replaced.”

CALPIRG’s survey also revealed a general consensus on the basic problem: 95% of respondents agreed that “companies often push upgrades on customers instead of repairing our existing products.” 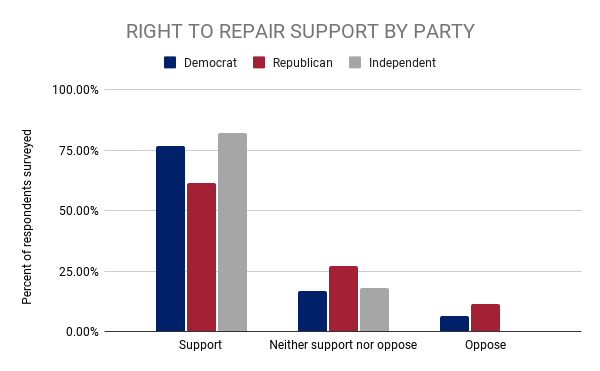 Most respondents indicated that this support would affect their vote at the ballot box: 57.5% said that they would more likely vote for a candidate who supported Right to Repair.

“Repair should be the norm, not the exception,” added Kyle Wiens, CEO of San Luis Obispo-based iFixit, an internet-based repair community. “For too long, manufacturers have stymied our ability to fix our things. It’s high time that we restore citizen access to the parts, tools, and information they need to fix their stuff.”

Electronic waste is growing, and unrepairable electronics are part of that problem. The world generated an estimated 55-million tons of electronic waste last year. The non-profit Tech Dump, which repairs and recycles donated electronics, estimates that only 14% percent of [consumer electronics] can be repaired due to lack of parts and manuals.

“The forced obsolescence of unrepairable products forces consumers to spend money to replace expensive electronics and appliances that could otherwise continue to work for decades,” said Nick Lapis, director of advocacy for Californians Against Waste, a co-sponsor of the bill. “This not only places a financial burden on consumers but also drives unsustainable mining and extraction that has a tremendous environmental impact up and down the supply chain.”

The issue has gained momentum in the past year: President Joe Biden has come out in support of Right to Repair, the FTC has said they will crack down on companies that restrict repair access and just last week three federal bills—including a right-to-repair bill for farm equipment—were introduced. There has also been modest but meaningful progress from companies like Apple and Microsoft to offer repair options.

Along with CALPIRG, the bill is co-sponsored by Consumer Reports, Californians Against Waste, and iFixit, representing consumer groups, environmental groups and the repair business community respectively.

“This is about taking on a throwaway system that wants us to treat everything as disposable,” said Kushen. “Together we can fix what is broken.”