With more and more suits against Monsanto lining up, communities are pushing back against the use of Roundup and associated glyphosate-based herbicides. One by one, school districts, cities, and counties are passing restrictions on Roundup, and finding alternative, healthier ways to maintain operations.

So far, CALPIRG has recorded more than 50 communities in California that have restricted glyphosate in some manner.

A Roundup-free future could be in the works for your community, too. This summer we spoke to city officials to find out how restrictions on Roundup are implemented in their community. Although the change can come with challenges, these cities show that every community has the capacity to reduce its usage of dangerous pesticides in some shape or form.

Benicia does not have an official written policy regarding Roundup, but operates with an Integrated Pest Management approach that does not include the use of glyphosate. The city finds that the biggest challenge is appeasing public expectations regarding weeds in the parks and landscaping, since they have not identified any strategies that provide the same level of control as achieved with glyphosate.

Benicia has become Roundup-free by devoting considerably more labor to weed abatement, in addition to increasing the use of alternative herbicides that are applied more frequently. One solution Benicia utilizes is a mulching program on planter beds that improves soil profile and retains moisture while reducing the growth of weeds, using recycled chips from tree pruning and removal operations.1

Like Benicia, Lodi does not have an official policy regarding the use of glyphosate, but staff have been instructed to not use it within 25 feet of playgrounds, in an effort to simulate federal smoking laws. The city has been exploring a few safer options for pesticide use, including acetic acid. Policy regarding Roundup began to change when court cases started showing up in the news, causing employee representatives to inquire about city usage in concern over employee health. Growing worry in the community about glyphosate’s carcinogenic nature also influenced this policy, and even though Lodi originally only used the pesticide for last resort type instances, officials are testing further restrictions on its use. The low amounts of glyphosate originally used by the city means that they do not anticipate restrictions in its use to come with unmanageable costs.

Since Roundup is cheap and effective, landscape maintenance has become easier and expected. The biggest challenge that Lodi faces is public expectations for how the parks and playgrounds should look.

“Expectations have to be reset in order to keep the public safe,” says Jeff Hood, Parks and Rec Director of Lodi. “I acknowledge that there is a balance between safety and aesthetics, and in this case, I hope the public will understand that the playgrounds won’t look as neat.”

Since 2005, Moraga Unified School District has operated under an Integrated Pest Management strategy that involves only organic pesticides, except in case of emergency. In order for pesticides to be used for an emergency, a committee must be formed and the school board has to approve. In order to continue operations without Roundup, the district’s most frequent solutions include hand picking, using acetic acid as an alternative pesticide, using flame weeders, as well as ensuring appropriate watering and aerating of soil. For many fields, weeds that are not obtrusive are simply allowed to grow.

Since the policy has been in place for more than ten years, being Roundup-free has become routine for Moraga Unified. The biggest challenge, according to at least one school official, has been manpower, since the small school district does not have a large amount of funding.

Learn about other cities in our 2017 Thriving Communities Guide: 10 Places Where You Can Live Roundup-Free. Here are five simple tips we learned from cities taking action to avoid the use of Roundup: 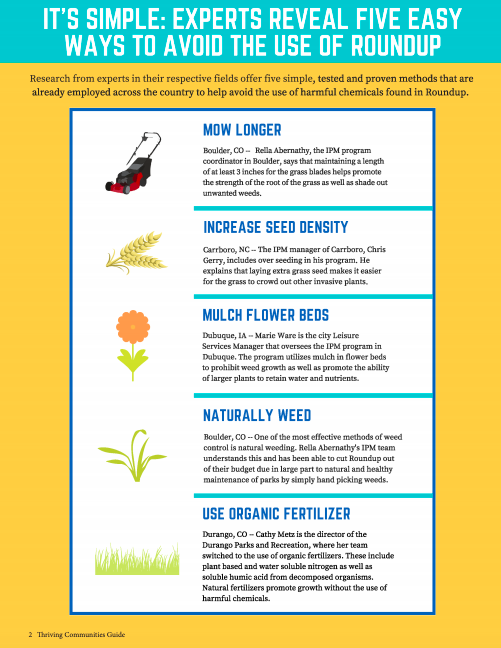 What This Means for Your City

There are some clear trends in a transition to a Roundup-free community. Residents need to reset expectations for the same level of maintenance in parks and landscaped areas- especially when funds are low, glyphosate alternatives can be expensive and time consuming. The good news is that there are viable alternatives out there: see comprehensive resources like the Bio-Integral Resource Center’s guide and reports from glyphosate-free communities like Marin County. Every environment is different, and may require experimentation to see what products work best to minimize weeds where you live.

It’s important to remember that community involvement and pressure is integral to changing city policies, whether it be to enact an Integrated Pest Management policy that reduces overall use of pesticides, or to completely ban glyphosate. Since restricting glyphosate usually means increased costs, feedback from residents is important to demonstrate support from the community.

If an outright ban seems too far-reaching for your city, consider following Lodi’s example by advocating for a ban on playgrounds, or push for a ban in your school district like Moraga Unified School District. At the end of the day, it is most important to protect sensitive populations from the potential long-term health effects of Roundup. – Mei Collins (right), a student attending Harvard University, is spending her summer as an intern with CALPIRG. Earlier this summer Mei testified at the East Bay Regional Parks District in support of their proposal to further restrict the use of Roundup on east bay parks property.