*This blog was written by transportation advocate Sam Little.

The New York Times covered the report’s release. A quick scroll through Twitter showed that the public divided: Is this technology something to praise, or something to fear? Ultimately, the NHTSA report, while an essential first step, doesn’t leave a clear picture whether self-driving cars will prevent crashes when they arrive in the future. However, plenty of research tells us what will prevent crashes now.

First, let’s discuss the report, as it is the first of its kind, and starts to show what’s working and what’s not in autonomous vehicle regulation and oversight. Last year, the NHTSA ordered  car manufacturers to disclose when a vehicle using Automated Driving Systems (ADS) or Advanced Driver Assistance Systems (ADAS) is involved in a crash. This is crucial information that we need to understand the reality of this new technology. The downside is this data, so far, is terrible.

ADAS, equipped in 92% of new cars, lacks a reliable reporting system. As the NHSTA order stands now, manufacturers only have to report the cases that they know. This chart breaks down the number of crashes involving ADAS technology by the manufacturer. You’ll see Tesla and Honda stand out amongst the pack. 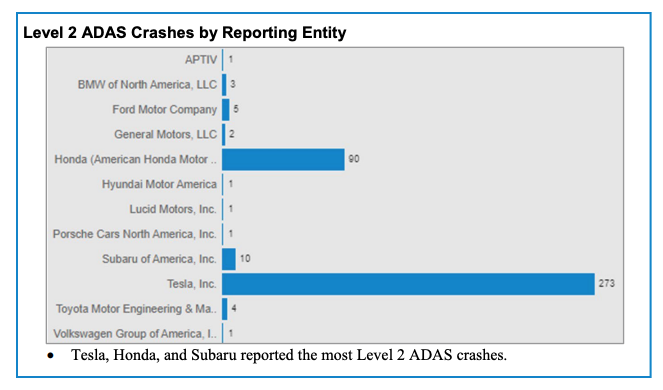 Why? Teslas are connected to the internet and automatically report if the car was in Autopilot when it crashed. Honda asks its drivers if they were using ADAS, so it relies on hard-to-verify personal accounts. Everyone else leaves it up to the police report.

With 92% of new cars coming with some ADAS technology driving in a country with 6 million crashes per year, one would expect that there is either some undercounting going on or people are not using this technology.

To better evaluate this technology, we need to have a requirement in place that mandates cars to have a system that reports when they crash in ADAS mode. We should also close loopholes like the one demonstrated by Teslas that shut off Autopilot one second before a crash.

While we must evaluate ADAS technology, the ADS reporting will be even more critical because here, the “fault” shifts more toward the manufacturers. If you market a car as being able to drive itself, you are responsible for how safely it goes.

The most glaring omission in the ADS report is miles traveled. It would make a big difference if Waymo cars crashed 62 times over 100 miles or 100 million miles. Without some crash-per-mile measure, it makes it difficult to evaluate risk. It would also be helpful to know where these test drives occur. Driving safely in San Francisco is different than in the desert. And finally, the same critique of ADAS reporting also applies to ADS that there must be a system that requires the car to report when it’s been in an accident, similar to the Tesla Autopilot reporting.

Collecting data is an important action that can protect us in the future, but it doesn’t do much to address the factors that allowed 42,000 people to die on the roads in 2021. There’s a lot to be done now that will make today’s roads safer while also preparing them for the self-driving era.

There are vehicle design regulations to make cars less lethal to a pedestrian. There are road designs that can reduce the number of high-speed conflict points. There are enforcement measures that law enforcement can take. All of these things will save more lives in the next few years than self-driving technologies will.

Our desired destination is zero roadway deaths. So, rather than go on autopilot and hope that car manufacturers will invent our way there, let’s put our hands on the wheel and focus on what we can control now.