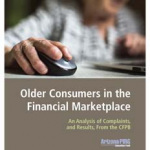 The stories told in these complaints reinforce the importance of the Consumer Bureau’s work to hold financial companies accountable for wrongdoing, to secure relief for mistreated consumers, and to help older consumers avoid mistreatment in the financial marketplace.

·      Older consumers can make tempting targets for predatory behavior in the financial marketplace. Scammers may look to take advantage of their savings, home equity, or guaranteed income. Older consumers facing a savings shortfall may be harmed by low-balance or overdraft fees at banks, or be tempted to take on credit or use products such as reverse mortgages, whose risks may not be fully understood. Payday lenders offering risky loans have been reported to cluster around senior housing to target seniors that receive Social Security or disability benefits.

·      Many older consumers are at increased risk because of health or living conditions, including cognitive decline, isolation, disability, or the recent loss of a loved one. These conditions can make seniors more appealing targets for scammers, more susceptible to misleading advertising, or more prone to misunderstanding confusing terms or fee schedules. A study from the American Journal of Public Health estimated that each year, 5.4 percent of older consumers are affected by financial scams or fraud.

Mortgages are the leading source of complaints to the Consumer Bureau’s Consumer Complaint Database among older consumers.

·      Mortgages account for 31 percent of complaints by older consumers.

·      Older consumers report a variety of problems with reverse mortgages, including trouble keeping up with property taxes and other payments, and trouble accessing credit. In one complaint, a consumer alleged that he or she could no longer access a reverse mortgage line of credit, after his or her loan was sold to a new mortgage company that did not provide accurate contact information.

·       Credit reports are the second-leading source of complaints by older consumers, accounting for 17 percent of such complaints. Most complaints – 67 percent – relate to incorrect information appearing on reports.

·      Many older consumers report inaccurate information on their reports relating to medical debt, which is a well-known source of inaccurate credit reporting. In one case, a senior asserted that he or she was denied the purchase of a new home (to downsize) after medical bills resulting from an injury erroneously appeared on his or her credit report.

·      Deaths of family members can create complicated financial situations for older consumers. In one consumer story, the consumer’s credit history was damaged by the inaccurate appearance of medical debt belonging to a recently deceased spouse.

Most debt collection complaints assert either inaccurate debt, or mistreatment by the debt collector.

·      Debt collection is the third-leading source of complaints by older consumers, accounting for 17 percent of such complaints (only slightly less than credit report complaints).

·      The majority of debt collection complaints – 71 percent – allege one of two issues: either the consumer believes they do not owe the debt, or the consumer feels they have been mistreated by the debt collector.

·      Older consumers report a variety of inappropriate communication tactics used by debt collectors. One consumer reported a string of contacts in which “Sometimes they curse at me and tell me that they know I am that woman and that they will have me thrown in jail.” Another consumer reported being contacted by a debt collector over false debt belonging to the consumer’s deceased husband.

Many of the companies that have received the most complaints from older consumers have been the subject of enforcement actions by the Consumer Bureau.

·      Among the 10 most-complained about mortgage companies, three have been the subject of mortgage-related Consumer Bureau enforcement actions: Ocwen Loan Servicing, Nationstar Mortgage, and a company (Green Tree) that later merged with Ditech, the company that ranks sixth for mortgage complaints among older consumers. In the case of Ocwen, the Consumer Bureau alleged that the company “botched basic functions like sending accurate monthly statements, properly crediting payments, and handling taxes and insurance.”

·      Equifax and Transunion were also the subject of enforcement actions for marketing their products as being free, or $1, when downloading the score automatically signed consumers up for an expensive credit monitoring subscription service (they would need to cancel within the trial period of either seven or 30 days to avoid the first payment).

·      The two companies with the most debt collection complaints, Encore Capital Group and Portfolio Recovery Associates, have both been penalized by the Consumer Bureau for using deceptive tactics to collect bad debt that was “potentially inaccurate, lacking documentation, or unenforceable.”

·      The Consumer Bureau has also taken action against at least 10 companies that engaged in illegal or predatory behavior related to reverse mortgages.

Nevada has the most complaints per older American.

·      The District of Columbia, Nevada, Delaware, Maryland, and Georgia have the most complaints by older consumers, normalized for population over 62.

·      The high per capita volume of complaints from the D.C. area may be a reflection of the region’s familiarity with the Consumer Bureau, stemming from a high number of people that work with or alongside the federal government.

To protect older consumers and all consumers in the financial marketplace, policymakers must protect the Consumer Bureau from attempts to weaken the agency or hinder its independence. In addition, state and federal policymakers should strengthen consumer protections in areas of risk including debt collection, credit reporting, and high-fee bank accounts. Policymakers should also allow the Consumer Bureau to move forward with its new arbitration rule that will make it easier for consumers to file class action lawsuits when harmed by financial companies.